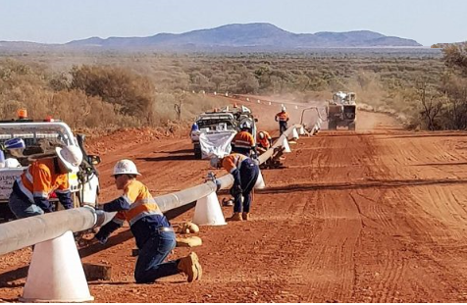 The Proline yellow plastic stackable pipe stands, or pipe cones as they are sometimes called, have been a huge success since their inception by Proline in the marketplace over 25 years ago. They’ve been such a success that others have tried to copy them.  Some even state that they have the strongest plastic stands in the industry, however while their three sizes hold the same capacity as our smallest stand, Proline’s stand capacity increases as the size gets bigger. However, just because you’ve invented something to speed up right-of-way placement of the pipe for welding, coating, repair, etc., doesn’t mean that you should stop innovating. With that in mind, Proline came out with another version of the popular stackable plastic pipe stands.

Travelling around the country visiting customers, our salesmen saw other plastic pipe stands in the field that looked like they’d seen better days. They were colored stands, some were black, and some were orange and they seemed to sag under the summer sun and the weight of the pipe.  This can be a concern especially if someone is lying under the pipe welding. With this information, the High Temperature (HT) Plastic Pipe Stands were conceived.

Why and How We Made These Stands

We wanted a plastic pipe stand with the versatility of the regular stands and something that wouldn’t sag under high heat environments.  What we came up with was new HT stands that were made with more resin to make the stand thicker so it would have greater strength under the hot summer Sun.  It was decided that if these stands were going to be made to withstand hotter climates, then the color should be white since that color does not attract the heat like other stands or pipe cones.

With the added resin and the white color, these stands are just what was needed for the southern US, Latin America, the Caribbean, Africa, Australia or anywhere where ambient temperatures could exceed 37°C or 98°F.   Yacht clubs in the Mediterranean have been regular customers as of late because these stands can hold their ship masts for maintenance under extreme heat situations. These were made for the pipeline contractor for their fast deployment on the right of way vs. building skids into a pipe holder, but as we’ve seen can be used in other applications.  Recovery and storage are also an advantage as well as not having to obtain certificates of fumigation and heat treatment or losing them to mold and/or rot.

In 2017, 400 of the HT White stands were shipped to Australia on a trial basis to fill a 40’ container that was only ¾ full, and to be used on various pipeline projects across the continent including the Great Sandy Desert.  The feedback that we received was phenomenal.  The company that supplied the stands received emails from end users asking why these weren’t promoted before. Since they were first introduced down under, seven 40’ Sea Containers have been filled to the rafters with all three sizes 2”-8”, 8”-12” and 12”-24” and shipped to keep up with demand.

We have not heard of one stand failing in the Australian heat.  As a pipeline company in Australia just bought all the stock from our distributor, he has asked for another 40’ container to be filled for the next voyage there. These stands like their yellow brethren, are made from UV stabilized HDPE (High density Polyethylene) with an average life span of 6.5 years, after which, can be recycled at the end of their life cycle. Since all stands do not require heat treatment to be imported, there are no customs delays. Is this something that could help you on your next pipeline job?

Our order desk and service departments are available 24 hours a day, 7 days a week for your convenience